In many of my previous posts I mention scouts or scouting with regards to what they look for or how they think.  I thought it would be appropriate to hear things straight from the mouth of a real professional baseball scout. 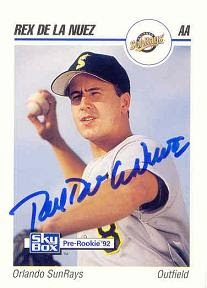 Rex DeLaNuez is currently a full-time scout for the Cincinnati Reds organization.   Prior to the Reds, he spent two years as a scout for the San Francisco Giants. His territory includes a number of sections in and around the Los Angeles, California area.   He is now in his 21st year in professional baseball, 10 as a player reaching the AAA level and 11 as a professional scout.  He agreed to answer some questions about the life of a scout, what he looks for, and how he evaluates players.  The transcript is below:
Coach McCreary: Thanks for taking the time to talk to us at Baseball By The Yard.  First off, when you evaluate players, what are you looking at and what kind of evaluation system do you use?
Rex: Scouts look for and evaluate, on a scale of 2 to 8, the five tools of players: fielding, running, hitting, power, and arm strength. I actually look for a sixth as well which is a player’s “make-up.”
(this previous post explains what he means by "make up")
Coach: What do the numbers 2 - 8 mean to you?
Rex: The rating is different depending on whether the player is a position player or a pitcher.
This is what the numbers mean when we rank a position player:
2 = Non-player; poor; possible minor league batter under .220
3 = Well Below average; possible MLB back up;  .220-.240
4 = Below average; possible quality utility guy or 4th outfielder on a team; .241-.260
5 = Average; possible regular MLB player with enough defense and offense to play
everyday;  .260-.280, 13-19 HR’s; running time - home to 1st around 4.3 sec.
(righthander) & 4.2 sec. (lefthander)
6 = Above average; possible quality regular; .280-.299
7 = Well above average; possible MLB All-Star w/consistency
8 = Outstanding; best in the game; .320+

These are the numbers for a pitcher:


2 = 84mph or below
3 = 85 – 86 mph
4 = 87 – 88 mph
5 = 89 – 91 mph
6 = 92 – 93 mph
7 = 94 – 95 mph
8 = 96+
Coach: During the peak playing months, what would a typical day of a scout look like?
Rex: We are either on the road driving long hours to see a game, watching two or maybe three games a day, on a plane to see a game, on the phone, in a hotel waiting for a game, or on the computer writing reports.
Coach: Pro players try to move up the minor league ladder (Rookie, A, AA, AAA) and
eventually to the major leagues.  What are the levels a scout may move through?
Rex: Scouts usually start off as a part-time scout for a local area.  Next would be a full-time scout in a larger area, then a cross-checker who may cover all of the East or West coast for example, then comes national cross-checker, and finally assistant scouting director or scouting director for an entire organization.
Coach: Are there any positions you would like to hold in the future?
Rex: I just would love to keep moving up as far as I can go in the game.
Coach: Does your professional playing experience help you in scouting?
Rex: I think so. Playing ten years in the minor leagues, reaching as high as AAA, participating in Instructional League, the Arizona Fall League, playing internationally, and playing with and against players that have played in the big leagues, helps me draw comparisons to talent as well as "makeup" when evaluating players. However, there are many scouts that have never played professional baseball and are excellent scouts/evaluators.
Coach: What do you like best about scouting?
Rex: The best thing is probably making a kid's life-dream come true by signing him to his first pro contract and then seeing him make it all the way through to the Major Leagues.
Coach: What is the worst thing about scouting?
Rex: Job security. Most scouts usually have year to year contracts. Sometimes there is turnover in the organization and you may find yourself out of a job pretty quickly.
Coach: What words of advice do you have for young players hoping to one day make it into the professional levels?
Rex: Don't ever give up on your dreams. Don't let ANYONE tell you you can't play at the next level. Keep working hard to improve on your deficiencies in the game. Always hustle and play hard because you never know who's watching.
Coach:  Thanks again Rex and best of luck this coming baseball season.
Baseball By The Yard would like to do future interviews for the blog with people in and around the game.  If there is a person or position you'd be interested in hearing from, send your suggestions to baseballbytheyard@gmail.com.

Posted by Coach McCreary at 4:23 AM

Email ThisBlogThis!Share to TwitterShare to FacebookShare to Pinterest
Labels: Interviews, Make Up, Scouting