I recently had the opportunity to talk with Coach Xan Barksdale of the University of Louisville.  Coach Barksdale is one of college baseball’s best catching instructors.  He was a Division I catcher himself at the University of Mississippi and went on to catch in the Atlanta Braves organization.  He has a terrific website and a couple products that every catcher and coach should take a look at.  Below is the transcript of my interview.  I hope you enjoy it.
As an assistant coach at the college level, I’m sure you do a lot of recruiting.  As a coach of catchers, what area(s) of the high school catcher do you most often have to correct when a player gets to Louisville?
Being at a high level program like Louisville, we have the opportunity to recruit catchers who already have most of the basics down before they arrive.  Probably the biggest area I work on with young catchers is throwing and developing arm strength.  Most young catchers are not aware of how much throwing catchers do at the college level and have to train their arms to prepare for that.  Most catchers we get at Louisville still have a lot of arm strength to gain so we immediately put them into a long-tossing program that is geared to maximizing arm strength.  Other than that, I find that many catchers coming into the college level need work on the mechanics of tag plays at home plate and catching pop-flies over home plate.  Plays at the plate can be very dangerous for catchers if they are not in the proper body position so I make sure all my catchers are clear as to how it should be done.  Pop-flies around the plate area have to be automatic outs at the college level.  That’s a play that is often mishandled by high school catchers but it can’t happen in college.  It has to be an out.
There are a lot of myths in baseball when it comes to baseball instruction.  What do you see as the biggest myth associated with catching?
What comes to mind is something I hear a lot when catchers drop a ball.  You often will hear someone from the stands or the dugout say “Squeeze it!” when that happens.  The problem wasn’t that the catcher didn’t squeeze the ball.  The problem is that the catcher caught the ball with the wrong part of the glove.  Most of the time, the catcher tried to catch the ball in the palm area of the glove.  A catcher should always catch the ball in the “pocket” of the glove which is the area between the index finger and the thumb.  When a catcher does this, he won’t need to squeeze the glove.  Catching it in the pocket closes the glove around the ball naturally. 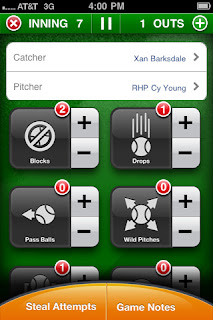 The app is called the Catchers Performance Summary.  It stems from a lack of statistics for catchers when evaluating their performance.  With hitters and pitchers, there is every type of statistic imaginable.  A batter’s average during night games vs day games.  How he hits on turf as opposed to grass.  A pitcher’s ERA from the wind-up vs the stretch.  You name it, they have it.  For catchers, there is virtually nothing.  The app allows someone to record all the statistics that would be valuable for catchers to see how they’ve done and how they are progressing.  It tracks the pitchers’ ERA when this guy is catching, pop-times to bases, number of blocked balls per total chances, dropped balls, and much more.  After a game I can then email a report to the catcher and show him his stats for the game.  We then can use that information to target areas that need improvement in practice.  My catchers love it because they get instant, usable feedback on their game performance.
Baseball By The Yard would like to thank Coach Barksdale for taking the time to do this interview.  We wish him and the rest of the University of Louisville Cardinals the best of luck in their 2011 season!
To get all the great instruction and products from Coach Barksdale, be sure to check out the following links:
Website: www.Catching-101.com
Catcher’s Thumb: www.CatchersThumb.com
Catching 101 Book: www.catching-101.com/Catching-101/Book.html
Catcher’s Performance Summary App – www.CatchersPerformanceSummary.com
Posted by Coach McCreary at 5:17 AM